CALL OR EMAIL TO BOOK A RESERVATION

We were founded in 1974, and have been guiding rock and ice climbing trips in the Gunks and Catskills Mountans for more than 40 years. We became an American Mountain Guides Association (AMGA) accredited guiding service in 1986, when the accreditation program was established.

We work with clients with wide range of abilities and experience - from total beginners, introducing them to outdoor rock climbing, to avid climbers visiting the Gunks from other regions and interested in climbing the Gunks classic routes. We help organizing group climbing trips - corporate outings, family retreats, adventure groups. We have extensive experience working with kids - during school breaks, we guide rock climbing outings for summer camps and boy scout groups.

We also offer a wide range of climbing programs - we teach rock climbing techniques, rope management and anchors, multi-pitch, lead climbing and more. Additionally, we organize customized programs, based on your abilities and goals. We bring 40 years of high professionalism and safety. 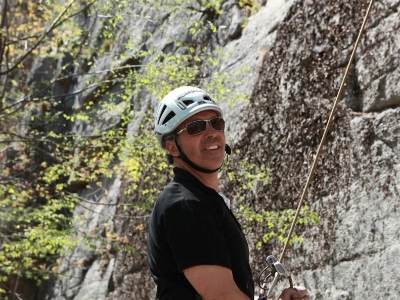 “I have been fortunate to have spent the last 23 years of my life climbing at one of the Northeasts most pristine climbing areas, The Shawangunks mountain range.

For the last 14 of those 23 years I have had the privilege of working as a guide for the longest running guide service on the Mohonk Preserve, HighXposure Adventures Inc., formerly High Angle, founded by Jon Ross in 1974. We are proud to say that we're celebrating our 45th year of business. The last 19 years that I have spent guiding here have been some of the most rewarding years of my life.

As your ambassador to the "Gunks" it's my aim to make sure that every HighXposure client has the best possible climbing experience of their life. I truly enjoy meeting new people, sharing my climbing knowledge, and showing you all the beauty this wonderful area has to offer. I look forward to climbing and guiding here for many more years to come.” 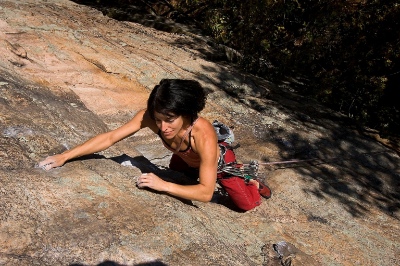 “Back in the day, I used to teach public high school in Philadelphia. During the summers I was part of an Adventure Based Counseling team that worked with inner-city High School students. Rock Climbing was one of the many venues we used to mentor and develop these young teens. I became obsessed with the sport.

I was so infatuated, that I left my job, got rid of all my positions, packed up my little car, and headed to New York, specifically the Gunks. I moved into my tent and began living the dream! I started guiding fulltime in 1998. For the next 6 years I spent my winters guiding in El Potrero, Mexico and the rest of the season guiding at the gunks. I have guided and climbed all over the country and have had the opportunity to spend a month in France on two separate occasions.

I love teaching and I love climbing. How fortunate I am to share my passion with others! I love taking out beginners. Sharing the experience of someone's first time on rock, first time doing multipitch, first rappel is completely gratifying and exciting. My delight at other people's discovery of Rock Climbing confirms that I am leading the life I was meant to live. Alright, I know it sounds corny but it is true. My philosophy on guiding is to teach technique and skills that allow the climber to work their way up a route making their own decisions and solving their own puzzles.

In 2005 I began working fulltime at The United States Military Academy. I work in the Department of Physical Education teaching Rock Climbing and Military Movement. I am also the assistant coach of the USMA Competitive Climbing Team, and the coach of the West Point Recreational Climbing Team.

I am passionate about my job. I am blessed that every single day, I have the opportunity to teach, inspire and interact with the future leaders of this great country.” 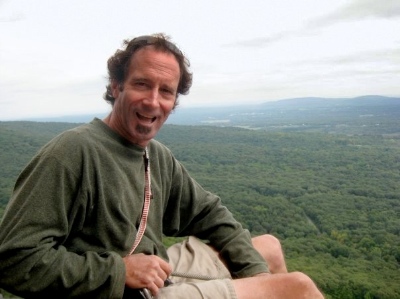 “Since 1988, when Jon Ross brought me into the fold of HighXposure (formerly High Angle Adventures), I have been guiding rock climbers on the awe inspiring Shawangunk Ridge.

I started climbing in 1984 after enrolling in a Phys Ed course at a local Community College, and was introduced to this unique mode of existence by Rosie Andrews and Rich Goldstone, who were our guides that weekend. Soon thereafter I relocated to Gardiner, NY to continue my education at the Shawangunk Hard Rock University.

In 1986 I was fortunate enough to have been offered the opportunity to work as a Ranger for the Mohonk Preserve by Thom Scheuer. I strive to follow Thom's example regarding the protection and promotion of the mission of the Mohonk Preserve, it's history of land stewardship, and it's rich tradition of which rock climbing has always been an important part of.

I continued to work for the Mohonk Preserve until I began my career with HighXposure. Jon Ross and I worked together for almost 20 years as High Angle Adventures, and although Jon has, for the most part, hung up his rack, I hope to continue working for at least the next 20 years with Bobby Ferrari, and the rest of the awesome crew at High-Xposure Adventures. We would all be honored to have you climb with us soon!” 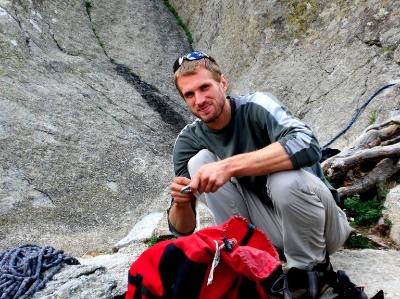 Tom is a licensed NYS climbing instructor who also holds a Bachelor of Arts in Sociology, along with a NYS Teacher Certification.

He has been a guide with HighXposure for 5 years, and has been living and climbing in the Shawangunk Ridge area since 2001. A passionate and dedicated local climber, Tom has extensive knowledge of countless area classics and hidden gems of all styles and difficulty.

When not guiding, Tom splits his time between family, friends, and climbing adventures all over the continent. While some of his favorite destinations have been in far off places like British Columbia, California, and Mexico, his all-time favorite places to climb are the sandstone cliffs of the South East, the Adirondacks, and of course, the Gunks. 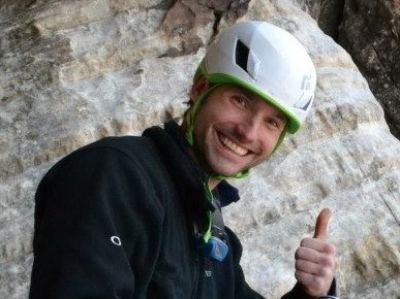 Dave Gates, a.k.a. Smiley Dave, is a licensed NY state Rock Climbing Guide. He is also AMGA SPI certified, certified by the Professional Climbing Guides Institute, and he is a certified Wilderness First Responder.

Dave started climbing in 1998 at Smith Rock in Oregon. Before becoming a guide at the Gunks, Dave guided at the Obed in Tennessee and Devil's Tower in Wyoming.

When he's not rock climbing, he's climbing trees as a part of his work as an arborist. His favorite places to climb are Yosemite National Park, the Red River Gorge in Kentucky and, of course, the Gunks. 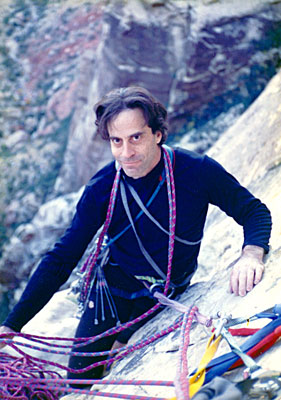 Andrew started climbing in the mid 1970s. He is DEC licensed for guiding both rock and ice and is AMGA SPI certified. He has extensive climbing experience in the Shawangunks as well as many other areas in the US, Mexico, and Europe. He is a very patient instructor and knows many hidden gems at the Gunks.

He lives with his wife and crag dog, Luca on the Shawangunks high point, Cragsmoor. 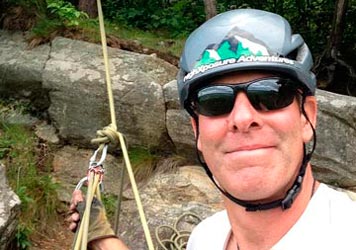 Simeon is a licensed rock climbing guide, and a certified Wilderness First Responder who has been technical rock climbing since 1995 and has taught people how to climb and stay safe in the vertical world for the better part of twenty years. Simeon is active in several climbing coalitions throughout the northern continent and believes in protecting open space for future generations. You can find Simeon's name in guidebooks within the Red River Gorge, Kentucky, Mount Charleston, Nevada, Ralph Stover State Park in Bucks County Pennsylvania, the New River Gorge, West Virginia, and throughout Mexico including; El Potrero Chico, Peña de Bernal, and Aculco de Espinosa. Simeon learned to climb on traditional gear in the Delaware Water Gap, then moved onto the Gunks in 1996 which propelled him into a life as a climbing guide. Simeon considers himself firstly as a traditional climber even though the the majority of his route development is largely comprised in sport climbing areas. 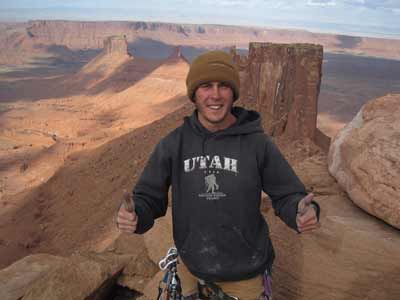 Garrett started climbing in 2004 while at SUNY Potsdam, where he went to school for a Bachelor of Arts in Environmental Studies. He also holds a Master of Science in Outdoor Education from SUNY Cortland.

After college, he was fortunate enough to live and work out west for a decade. He spent his free time climbing in places such as Zion National Park, Red Rocks, Joshua Tree, and City of Rocks. He also spent time doing big wall climbs in Yosemite, such as Half Dome and El Captain.

He has worked as a climbing guide in City of Rocks, Idaho, the New River Gorge, West Virginia, as well as his favorite place, the Shawangunks, New York. When not guiding, Garrett likes to spend time exploring the outdoors with his two sons, Isaac and Leo.

He is a licensed NY state Rock Climbing Guide, holds an AMGA SPI, and is a certified Wilderness First Responder. 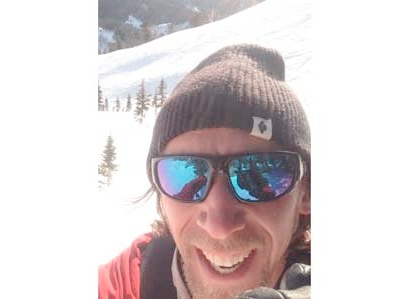 In the early 90s, I learned to climb in the Gunks. Although I moved to Boulder, Colorado in 2006, I still call the Hudson Valley home and try to make it back every season.