CALL OR EMAIL TO BOOK A RESERVATION 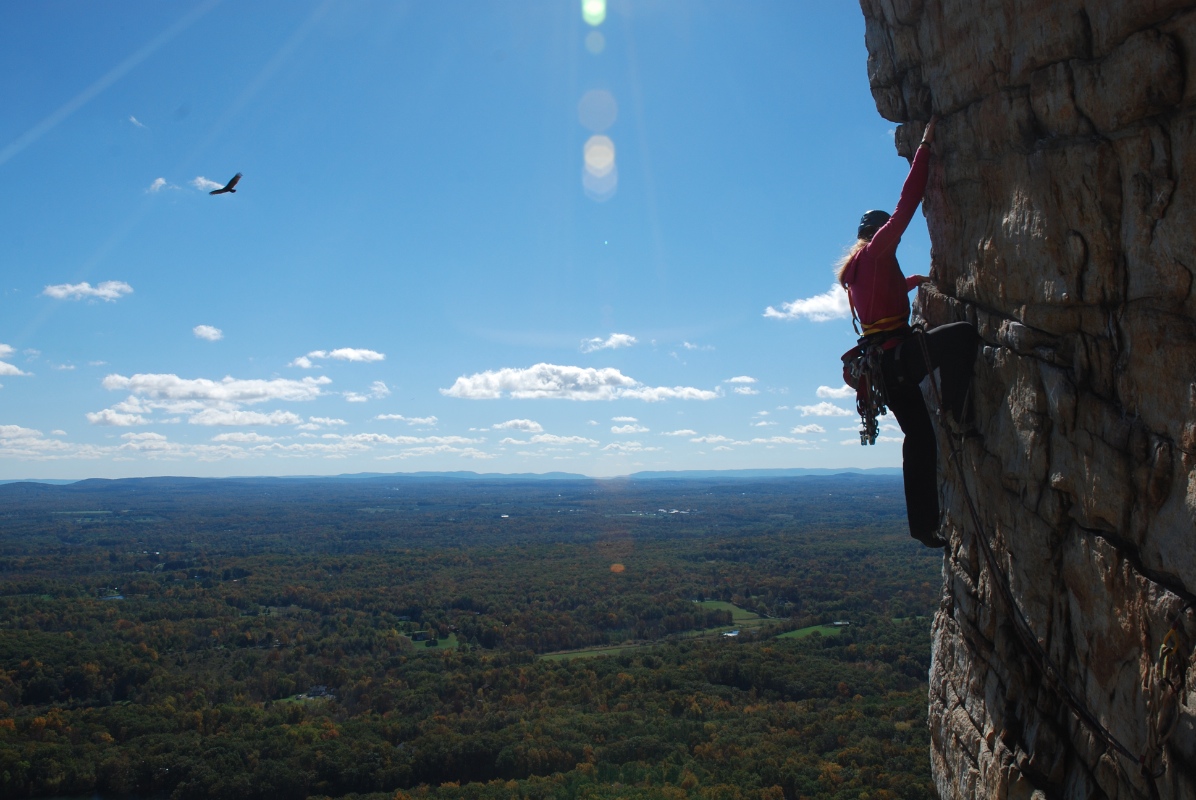 Recognized as one of the outstanding climbing centers in the United States, the "Gunks" offer a wide variety of high quality climbing opportunities at every level from beginner to expert. Easy access to the climbs and the friendly nature of the area combine to provide a comfortable atmosphere which makes for a great learning environment.

With the spring rock climbing season upon us, HighXposure Adventures suggests taking advantage of our special pre season mid-week rates, as well as our new family packages. It is a great time of the year to experience all the wonderful climbing the northeast has to offer. So if you are interested in learning the newest AMGA skills and techniques or would just like to refresh the ones you already know, we are offering many new climbing clinics and classes.

The Shawangunk Ridge /ˈʃɑːwəŋɡʌŋk/, also known as the Shawangunk Mountains or The Gunks, is a ridge of bedrock in Ulster County, Sullivan County and Orange County in the state of New York, extending from the northernmost point of New Jersey to the Catskill Mountains. Shawangunk Ridge is the continuation of the long, easternmost ridge of the Appalachian Mountains, becoming Kittatinny Mountain after it crosses the New York-New Jersey border, and Blue Mountain continuing through Pennsylvania. This ridge constitutes the western border of the Great Appalachian Valley.

The ridgetop, which widens considerably at its northern end, has many public and private protected areas and is not heavily populated. While in the past, it was chiefly noted for mining and logging and a boom-era of huckleberry picking, as well as the fires set to create favorable conditions for further growth. Today it has become known for its outdoor recreation, most notably as one of the major rock climbing areas of North America. Also known for its biodiversity and scenic character, the ridge has been designated by The Nature Conservancy as a significant area for its conservation programs.

The English name, Shawangunk, derives from the Dutch Scha-wan-gunk, the closest European transcription from the colonial deed record of the Munsee Lenape, Schawankunk (German orthography).

Lenape linguist Raymond Whritenour reports that schawan is an inanimate intransitive verb meaning "it is smoky air" or "there is smoky air". Its noun-like participle is schawank, meaning "that which is smoky air". Adding the locative suffix gives us schawangunk "in the smoky air".

Whritenour has suggested that the name derives from the burning of a Munsee fort by the Dutch at the eastern base of the ridge in 1663 (a massacre ending the Second Esopus War), where it spread quickly across the basin on land deeds and patents after the war. Historian Marc B. Fried writes: "It is conceivable that this was...the Indians' own proper name for their village [and fort] and that the name was appropriated for use in subsequent land dealings because of the proximity of the...tracts to the former Indian village.... The second possibility is that the name simply came into existence in connection with the Bruyn [purchase of Jan., 1682, the first appearance of the name in documentary record], as a phrase invented by the Indians to describe some feature of the landscape."[4] However, Fried also notes that the name's swift spread in the deed record suggest it was in use as a proper name before the Bruyn purchase. Shawangunk appears nowhere in reference to the fort itself in the extensive, translated Dutch record of the Second Esopus War. Shawangunk became associated with the ridge during the 18th century.

European colonists began to truncate Shawangunk into "Shongum" (/ˈʃɑːn.ɡʌm/ shahn-gum). Shongum was mistakenly identified as the Munsee pronunciation by the Reverend Charles Scott writing on Shawangunk's etymology for the Ulster County Historical Society in 1861. The error has been reinforced in ethnographic sources and ridge literature, and by historians, librarians, and ridge educators for more than 140 years.

Both "Shawangunk" and "Shongum" are popular usages among locals native to the region. The "Gunks" is also a widely used endearment which has been in use at least since the mid-19th century. In a letter dated August and postmarked August 8, 1838, Hudson River School painter Thomas Cole corresponding with painter A.B. Durand writes, "Do let me hear from you when you get among the Gunks. I hope you will find every thing there your heart can wish." The Shawangunks, particularly around Lake Mohonk, were the subject for several Hudson River School painters.

The Shawangunk Ridge is the northern end of a long ridge within the Appalachian Mountains that begins in Virginia, where it is called North Mountain, continues through Pennsylvania as Blue Mountain, becomes known as the Kittatinny Mountains after it crosses the Delaware Water Gap into New Jersey and becomes the Shawangunks at the New York state line. These mountains mark the western and northern edge of the Great Appalachian Valley.

The ridge is widest (7.5 miles/12 kilometers) near the northern end, narrow in the middle (1.25 miles/under 2 kilometers) with a maximum elevation of 2,289 feet (698 m) near Lake Maratanza on the Shawangunk Ridge. The Ridge rises above a broad, high plain which stretches to the Hudson River to the east. On the west the low foot-hills of the Appalachian Mountains mingle with a low flat made by the Rondout Creek and Sandburgh Creek, the Basha Kill and various small kills as well as the Neversink River and Delaware River at the southern end. These adjacent valleys are underlain by relatively weak sedimentary rock (e.g., sandstone, shale, limestone).

There is an unusual diversity of vegetation on the ridge, containing species typically found north of this region alongside species typically found to the south or restricted to the Coastal Plain. The results is an area where many regionally rare plants are found at or near the limits of their ranges. Other rare species found in the area are those adapted to the harsh conditions on the ridge. Upland communities include chestnut oak and mixed-oak forest, pine barrens including dwarf pine ridges, hemlock-northern hardwood forest, and cliff and talus slope and cave communities. Wetlands include small lakes and streams, bogs, pitch pine-blueberry peat swamps, an inland Atlantic white cypress swamp, red maple swamps, acidic seeps, calcareous seeps, and a few emergent marshes.

The ridge is primarily Shawangunk Conglomerate, a hard, silica-cemented conglomerate of white quartz pebbles and sandstone that directly overlies the Martinsburg Shale, a thick turbidite sequence of dark gray shale and greywacke sandstone. The Martinsburg Shale was deposited in a deep ocean during the Ordovician (470 million years ago). The Shawangunk Conglomerate was deposited over the Martinsburg Shale in thick braided rivers during the Silurian (about 420 million years ago); both sequences of sedimentary rock were subsequently deformed and uplifted during the Permian (about 270 million years ago). As a result of this deformation, strata within the ridge are involved in a northward plunging series of asymmetric folds (e.g., anticlines and synclines) that dip gently towards the west. These same folds, involving strata that overlie the Shawangunk Conglomerate, are exposed north of Shawangunk Ridge in the Rosendale natural cement region, where they can be directly examined in abandoned cement mines. Strata along the eastern margin of Shawangunk Ridge are truncated by erosion, resulting in the prominent cliffs characteristic of Shawangunk Ridge. The Shawangunk Conglomerate is very hard and resistant to weathering; whereas the underlying shale erodes relatively easily. Thus, the quartz conglomerate forms cliffs and talus slopes, particularly along the eastern margin of the ridge.

The entire ridge was glaciated during the last (Wisconsin) glaciation, which scoured the ridges, left pockets of till, and dumped talus (blocks of rock) off the east side of the ridge. On top of the ridge, the soils are generally thin, highly acidic, low in nutrients, and droughty, but in depressions and other areas where water is trapped by the bedrock or till, there are interspersed lakes and wetland areas. Soils on top of shale are thicker, less acidic, and more fertile. Topography on the top of the northern Shawangunks is irregular due to a series of faults that form secondary plateaus and escarpments.

The Shawangunks contain mainly public lands as well as several small residential areas. Most of the northern Ridge is protected by Minnewaska State Park Preserve, and Sam's Point Preserve with more than 100 miles (160 km) of hiking trails and several climbing areas. In 2007 Shawangunk Ridge State Forest and Witches Hole State Forest were added. The Long Path long-distance hiking trail follows the ridge from Sullivan County to the vicinity of Kerhonkson; south of it the Shawangunk Ridge Trail connects to the Appalachian Trail near High Point. There are several old carriage trails on the Ridge including; Smiley Road from Ellenville into Minnewaska State Park Preserve; and Old Plank Road and Old Mountain Road in Shawangunk Ridge State Forest. Many of the foot trails are updated and maintained by the New York-New Jersey Trail Conference.

Unlike the major public land holdings on the Shawangunk Ridge, the Mohonk Preserve is a private land trust which requires a $17/person day fee. 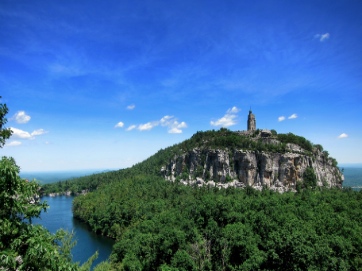